In this post, you can learn the steps to make memes and also find out 6 great meme generators that can help to make memes with your need.

Memes have transcended through the boulevard of the Internet. They range from subjects such as politics to college humor. As meme culture has become an integral part of the modern Internet, it already has become a big part of how we communicate online. In this post, I would like to share with you the best free meme generators, which include desktop apps and online services. In the following part, there are 6 great meme generators introduced. All of them are easy to use and they export videos without watermarks.

Additionally, certain video editing skills make your memes much funnier. You may want to learn how to do a picture-in-picture effect to make pic-in-pic memes, how to add animations to videos to make animated memes, and how to edit GIFs to make GIF memes.

Starting with amongst the oldest meme maker online that has been around for an extended period. There are two text boxes on the template by default, which can be bumped up as per your needs. Right below the operating area, you view and choose the latest hottest meme. 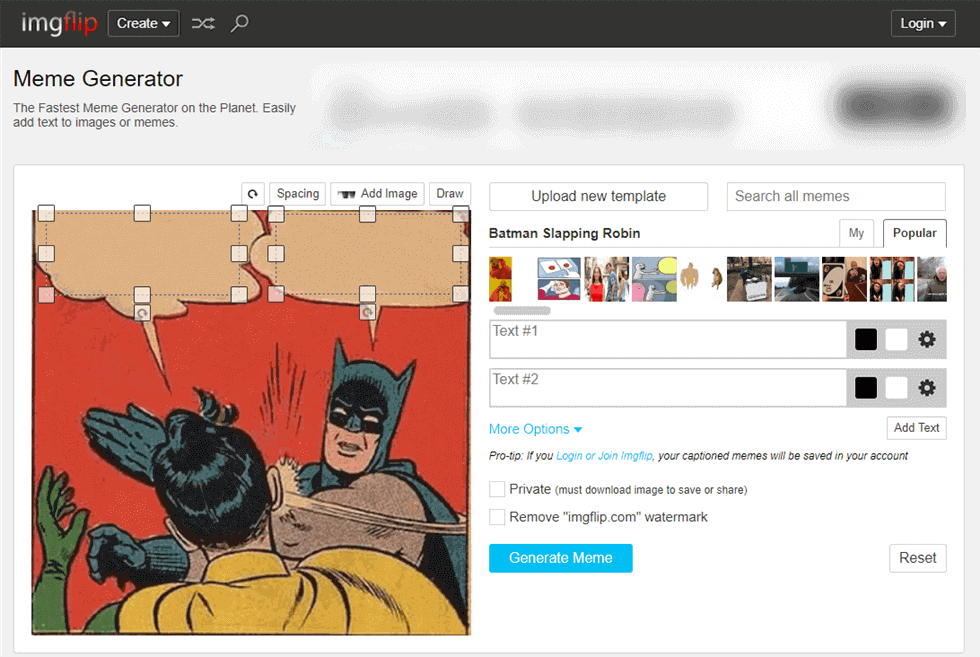 When you talk about an all-rounder online memes editor, Kapwing can fit the description. They have videos, gifs, pictures, and webcam recordings for memes. Kapwing listed memes with different categories where you can directly get the meme you need. Also, you can edit the internet meme online with ease.

EnterMeme is more than just another meme maker online. You get an engaging community to connect with and share the hobby of memes. 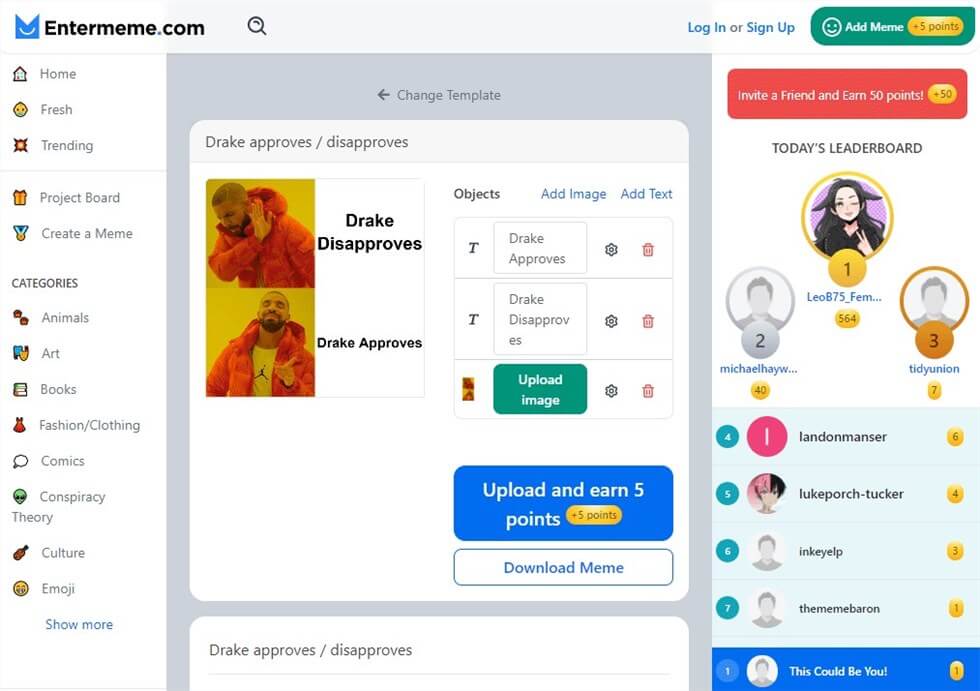 For everyone looking to go offline and the extra mile with meme creation, certain windows apps do the job pretty well. Besides, online video meme-makers have a long way to go.

Apps like FilmForth have simplified it down to the last bit. You don’t need any kind of expertise in using computers. A general know-how and you have yourself a firm grip on the meme editor by IoForth.

FilmForth provides lots of online gifs and stickers that you can add to the file you prefer. But you can only export the file as a video which won’t support gif and pics making.

There is a video tutorial using FilmForth to make a funny movie which may give you some inspiration on Meme making.

Meme Generator is a meme editor/creator app for Windows that has all over 250 meme templates in its collection. Overall the user interface is pretty easy to use for creating a classic text-based meme. 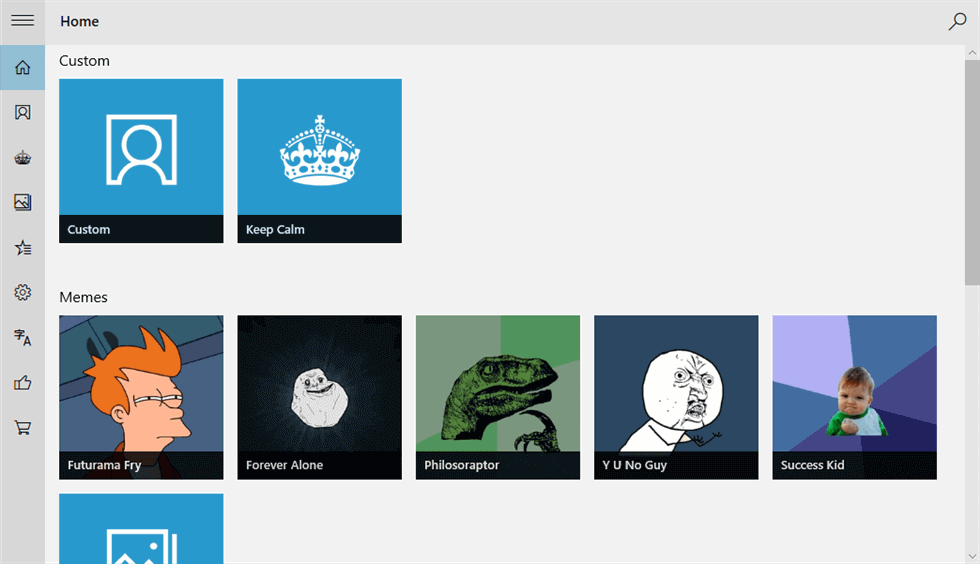 Meme Generator Suite is a modern meme creator app for Windows 10 that ticks all the right boxes. The extensive collection of memes will enthrall you. It also contains a vast amount of meme templates, original font styles and you can always use your own images. 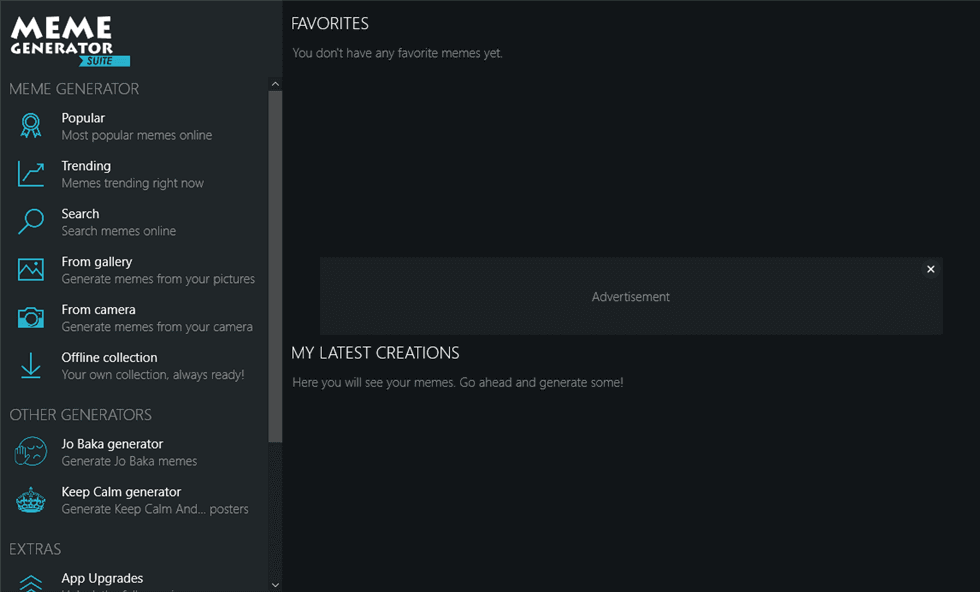 Create Your memes – Meme’ing By Yourself

Creating memes is as easy as drinking water. All you need is a meme template, and place your text on it—the simplest form of memes.

There are several dozen meme-makers online for simple text on picture memes. Select a meme template, place text on it, and you are golden.

Moving to advanced memes, which include the likes of videos and face morphs. They involve using certain easy-to-use meme video maker apps for Windows, which will be discussed later in this post.

Let’s move on to the free online meme-makers for now, which are the easiest to use.

How to Make a Meme?

Upload the image/video you want to make into a meme > Edit the image/video clip by adding text, changing color, adding stickers, etc. > Export and save the file to the computer.

That’s it! It’s quite simple to edit a meme. But it would be difficult to make the meme perfect you need.

What is the best app to make memes?

As you can see from the candidates above, Imgflip is the best online meme maker for its handiness and ease of use, while FilmForth being the best desktop meme make program for its steady and trustworthy performance and extensive video/photo editing features.

How do I turn a picture into a meme?

To turn a picture into meme, you need a meme maker to add text to it and edit it, then your picture will look exactly like a popular meme.

How do you make memes on iPhone?

How do you make a creative meme?

Use your creative mind to make a creative meme! Always remember the key elements of a good meme include virally transmitted images, short but deep texts, a perfect combination of them, and humor is always appreciated.

Amongst the first to go viral on the Internet was the baby of a video dancing, originally posted on YouTube. It became a viral sensation across different formats, primarily seen on blogs, websites in the form of a GIF.

The worldwide web grew, and forums like 4chan, Ebaum’s world saw the early prevalence of memes. Early meme formats focused on captions on a photo, primarily with top and bottom text. 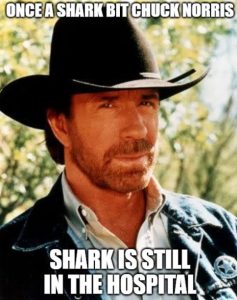 The Chuck Norris facts(hyperbolic demigod status to Chuck Norris, as a part of the Internet joke) made rounds worldwide.

After that, we rolled into 2007, pivoting to videos. And everyone was rick-rolled into watching the YouTube video of Rick Astley performing “Never Gonna Give You Up” as the song’s official music video.

As the harmless Internet prank picked up, you could find it prominently on forums like 4chan, Ebaum, and social media sites like MySpace and Orkut. Any suspicions during the link were either a rick-roll or malware, majorly the former.

To this day, Reddit has kept up the meme tradition, and you can find some rick-rolls now and then by the users.

Twitter and Tumblr were becoming the next destination in the new decade of the 2000s. People looked into something better than Facebook for humor and funnies in general.

Memes are fun, and creating them should feel the same. While online meme-makers have undoubtedly been impressed with its ingenuity, it lacks the wholesome touch. Offline meme creator apps have certainly picked up the pace in recent times. Download them once, and you are ready to make some humor content.