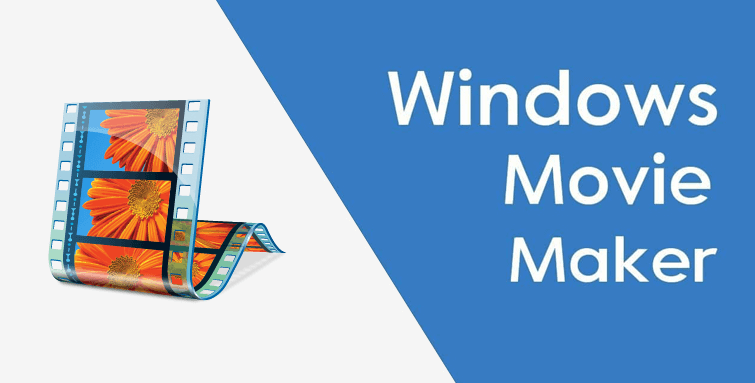 Back in the days, there was a tool that was the king of video editors, and if you used to edit videos (like I did), then you probably know which one I’m talking about – Windows Movie Maker. Windows Movie Maker was a beginner-friendly video editor that came preinstalled with Windows, which made it the natural choice for any video editing purposes you might have.

To kick things off, let’s compare head to head the 10 editors I’ve selected for this article based on three criteria. 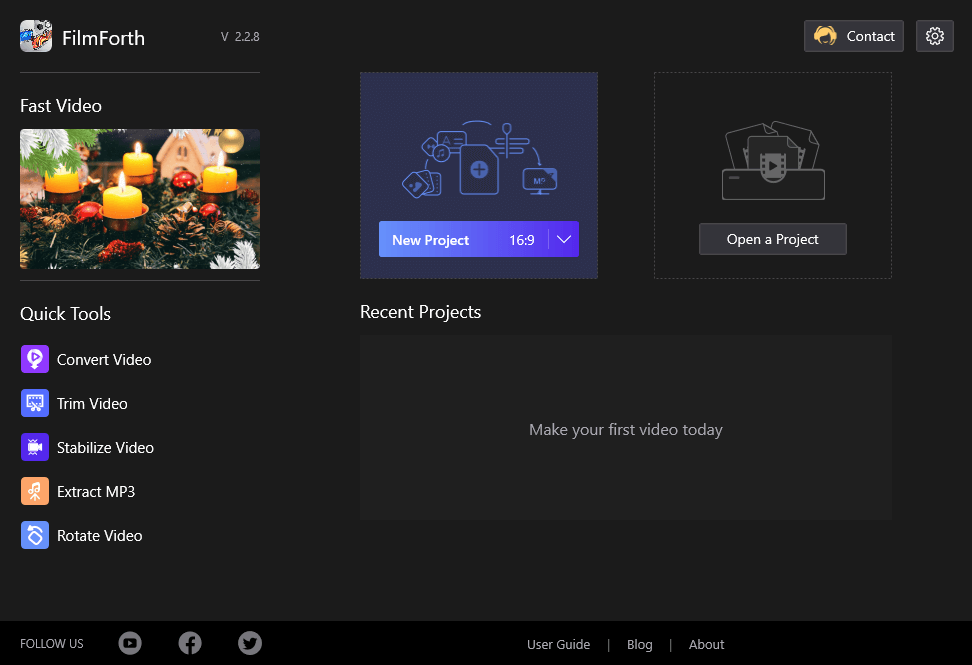 To kick things off we have FilmForth, a free, beginner-friendly video editor that’s available for Windows 10. So, what makes FilmForth an ideal Windows Movie Maker alternative?

Well, FilmForth uses a timeline and not a storyboard (like other editors do), so it has a very simple and intuitive layout, which is similar to the one Movie Maker used to have.

Some highlights of FilmForth you may interest in.

Some basic free video editing tips you can find with this video tutorial.

As one of the few video editors on the list that’s watermark-free, finally, FilmForth is available on the Microsoft Store, and you can click here to download it. 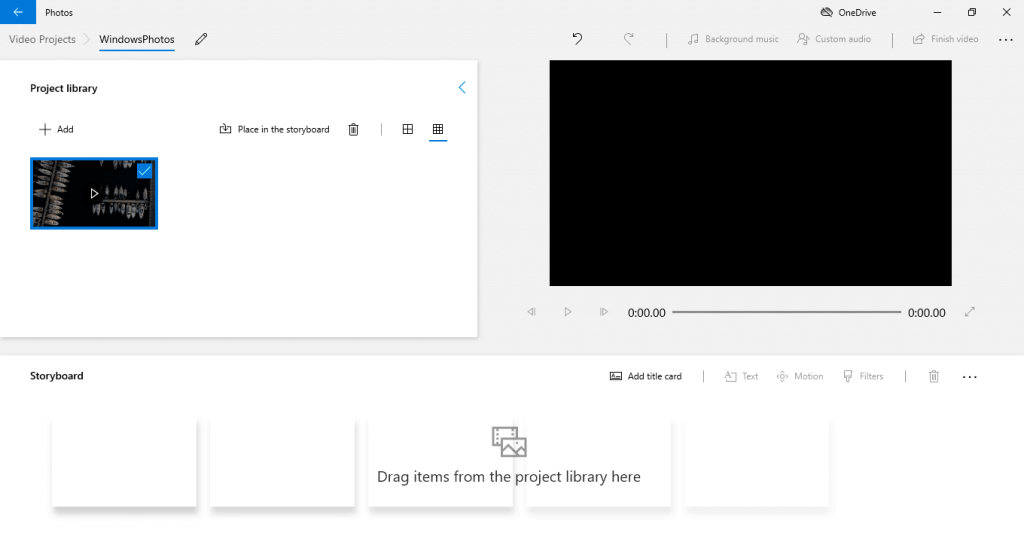 Coming second, we have what many consider the successor of Windows Movie Maker. But why is that? Well, it shares two characteristics with the late Movie Maker. Both are free, easy to use, and developed by the same company (Microsoft).

To be honest, If I had to make a choice I’d pick Movie Maker over Microsoft Photos all day. It might be because of nostalgia, but I feel it was a better-rounded editor. That doesn’t mean Microsoft Photos is useless, as it can perform a lot of basic video editing tasks such as trimming, adding text or music, etcetera.

So if you’re searching for an alternative to Movie Maker, but don’t want to download any apps and just want to perform basic edits, then the Microsoft Photos video editor is a decent tool for you. 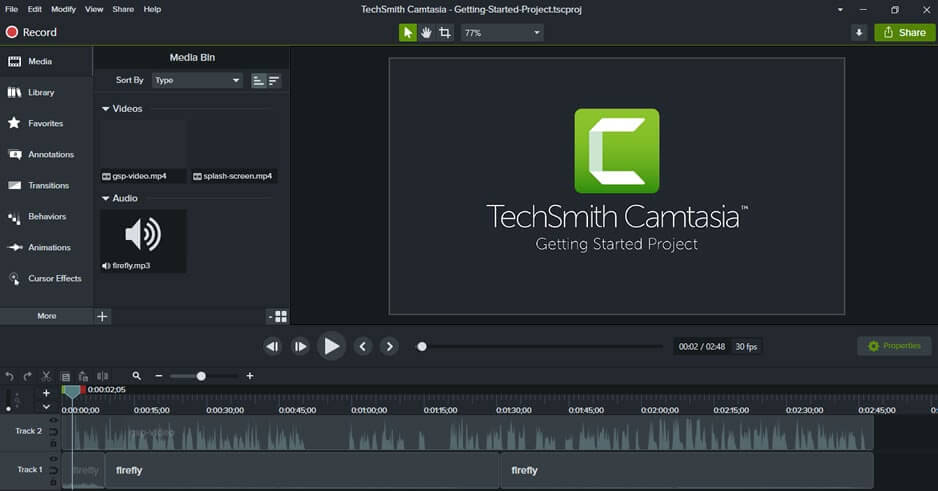 If you’ve searched for video editing software before, then you’ve probably heard of Camtasia (previously known as Camtasia Studio). With its first version being released in 2002, Camtasia is an established name when talking about video editors.

Camtasia comes with many editing tools, most of them simple, which makes it a good replacement for Movie Maker. But what makes it stand out is its screen recording tool, which is a feature that not a lot of video editors have. Also, Camtasia is beginner-friendly and offers a 30-day trial, after which you’ll be charged $249.99 to continue using the editor.

So it’s a great alternative to Movie Maker if you don’t mind spending some money and you’d like to have the ability to record your screen. 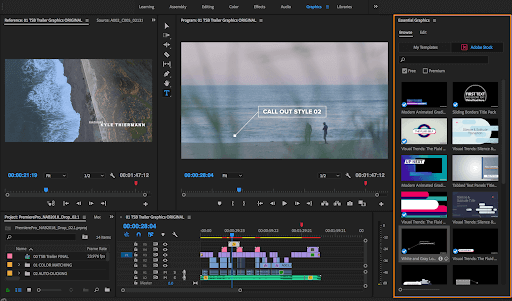 I decided to include Adobe Premiere on this list because it’s a more advanced alternative to Windows Movie Maker, so if you’re looking to take your videos to the next level, then this should be your choice.

From essential to advanced editing tools, Premiere has everything you need to make a professional video, and it’s widely regarded as an industry standard. It comes with a 7-day trial, and then you have many pricing options to choose from, starting with a monthly one with a price of $19.99.

This tool has a more significant learning curve than the others though, so be prepared to spend many hours watching Youtube tutorials if you decide to try it, and if this is your first time using a video editor (or you want to do some basic video editing) you should look at the other options on this list (especially at the ones marked as ideal for beginners on the list above). 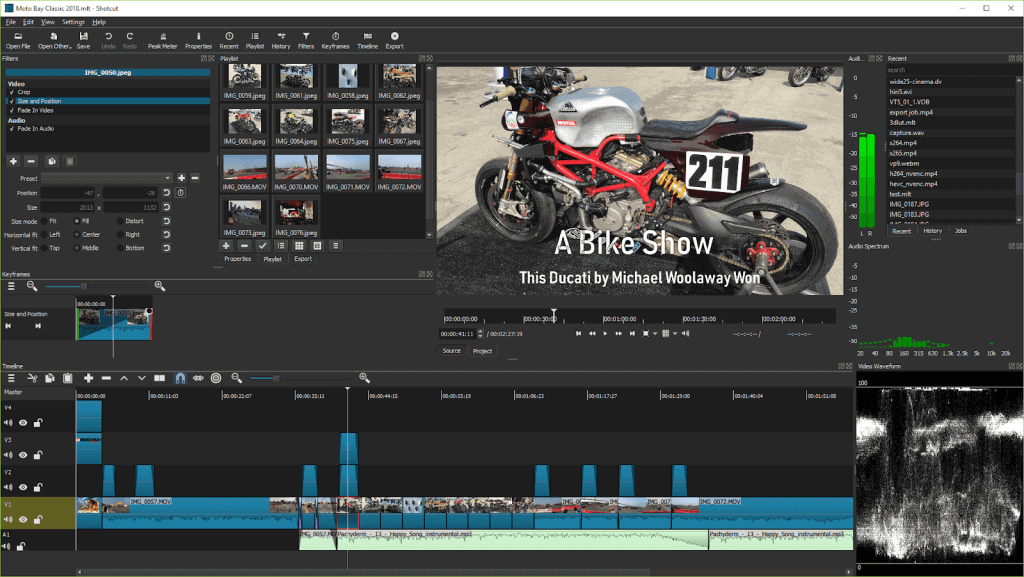 Shotcut is an open-source video editor that offers many standard video editing features but lacks some you’d see on advanced (and paid) apps.

Since it’s open-source, Shotcut is free for commercial use, which means you can edit videos on it and upload them without any problems. Plus it includes support for 4K resolutions, and many video filters and effects to select from. But be careful, as Shotcut is a video editing software meant for people with intermediate skills, meaning, people who have used video editors before and know how to operate them, as it has an interface that’s not very intuitive. 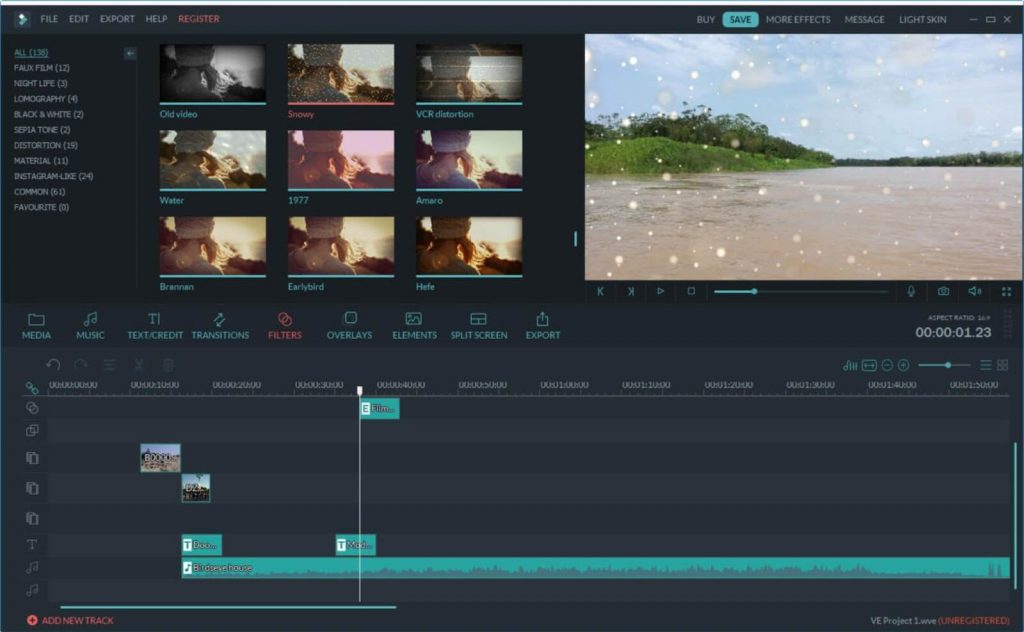 Filmora is a beginner-friendly video editor with a good amount of filters, text tools, and video editing features. But what makes Filmora a good alternative to Windows Movie Maker is its polished interface, which is something not many editors have. Plus, Filmora is also an editor that has many advanced features you’d see on higher-priced video editing apps while having a shorter learning curve when compared to other editors, which makes it a great editing tool if you don’t want to spend a lot of money.

You can try out Filmora with a free trial but take into account that anything you make (and export) will have a watermark. If you decide to go for the complete product, though, Filmora has various pricing plans, starting at $11.99 for 3 months, and ending at $59.99 for a full license.

Overall, if you don’t mind spending some money and you don’t need to record your screen, you’ll find Filmora a great alternative to Windows Movie Maker. 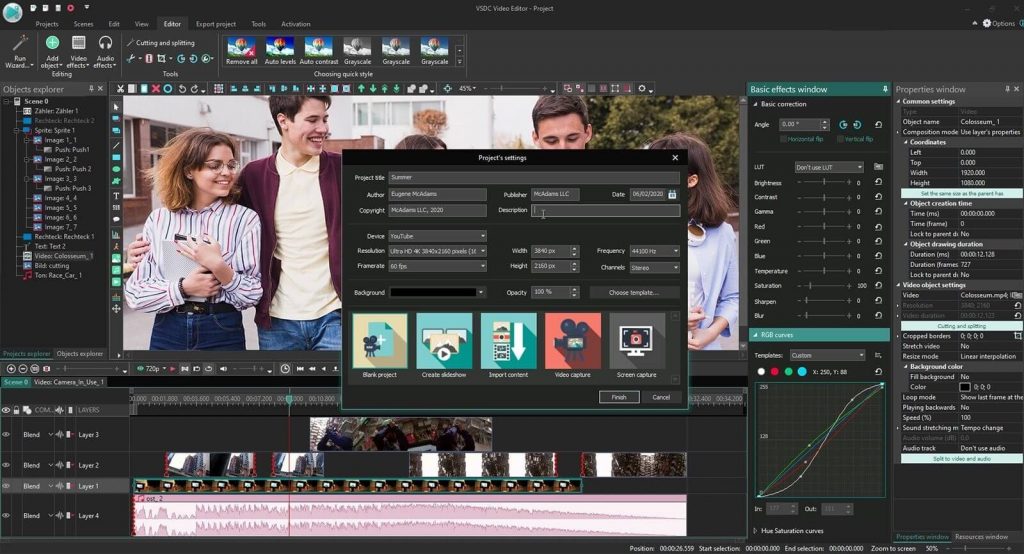 VSDC is a free video editor that comes with a lot of options, effects, and many features you won’t find on other free video editors, but lacks a user-friendly interface, which makes it hard to master it. It supports all popular video and audio formats and has a large set of video effects, filters, and transitions, which is always appreciated, especially when using free editors.

It also comes with advanced options like a Chroma Key tool to remove green background, 360 video editing, color correction, video stabilization, and more. As I mentioned, VSDC is a free video editor, but it also has a Pro paid version, which costs $19.99 and comes with more advanced options, and premium technical support. This makes it a worthy alternative to Movie Maker, especially if you’re on a budget. 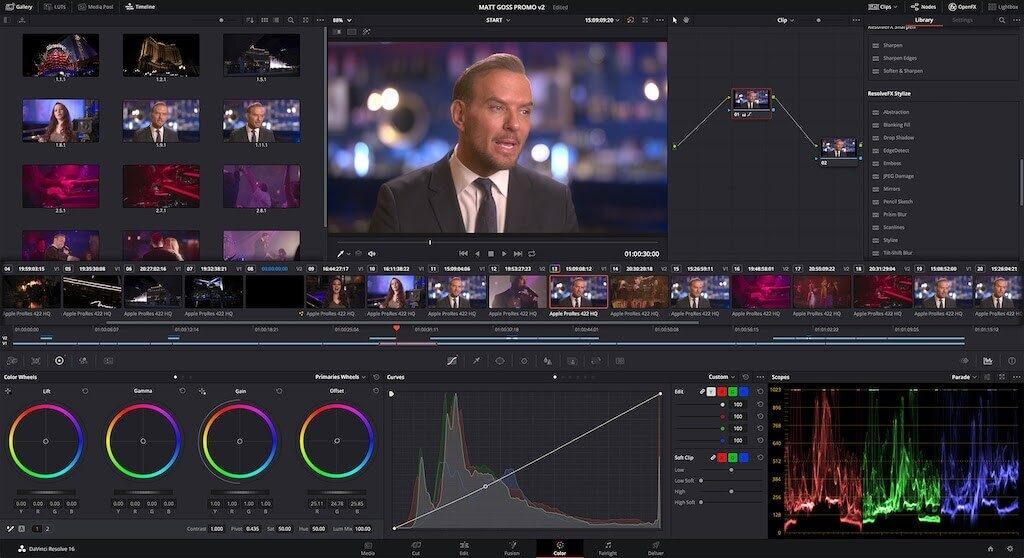 If you’re looking for a professional, free alternative to Movie Maker, then DaVinci Resolve is the ideal tool for you. At the start, DaVinci Resolve might intimidate you a bit, as the interface is a bit cluttered, and it contains a lot of buttons and windows. But once you start to get the gist of it, you’ll see how much of a powerful tool it is.

The best part about DaVinci Resolve is that it packs all the features needed for professional video editing while being a free program. But it also has a paid version, at a price of $299, which is expensive when compared to other tools in this article, but it’s totally justifiable once you see the potential this program has.

Overall, it’s a great choice if you want a free video editor capable of producing professional videos, plus it has compatibility with Windows, Mac, and Linux. If you’re willing to spend some hours figuring it out, and you need to do advanced edits, then DaVinci Resolve is an excellent alternative to Movie Maker. 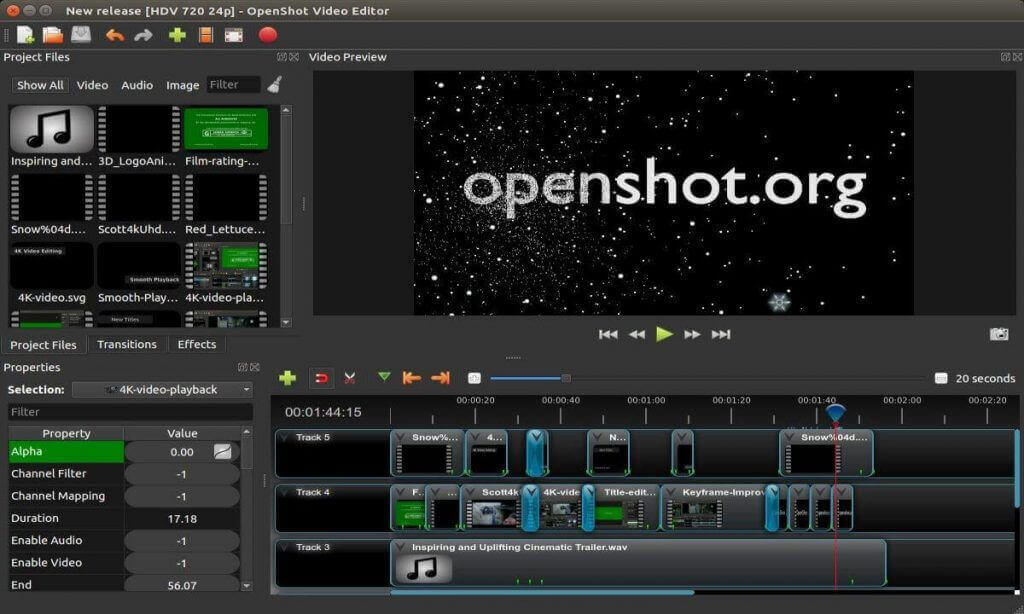 OpenShot is an open-source video editing software available for Windows, Mac, and Linux and is totally free to use. You can make any edits to your videos with it, including trimming, adding text, images, video, and audio, or even 3D text. It also has a simple interface, which makes it easy to use and master.

Being a free tool. it’s expected that it would fall to some of the leaders in the market. However, OpenShot can be a useful tool for professionals while being relatively easy to pick up by beginners. Overall, OpenShot is a decent choice if you want an open-source editor with a layout very similar to the one Windows Movie Maker used to have. 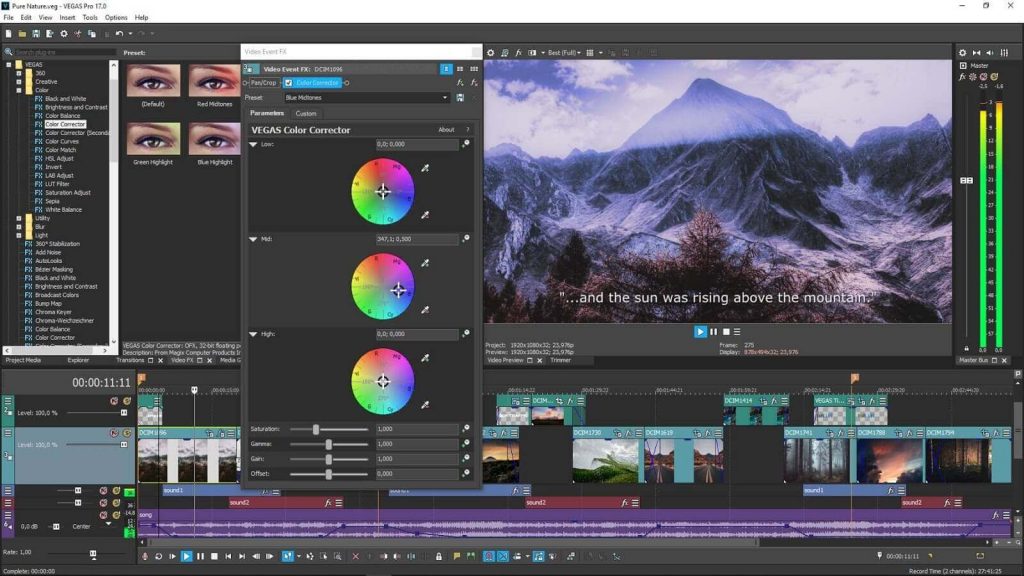 Vegas Pro (formerly known as Sony Vegas) is another established name on this list, as it’s one of the most popular video editors on the market, and is a very common choice for advanced video editors, especially Youtubers.

Now, Vegas Pro is a program with a steep learning curve, but at the same time, it’s easier to use than other advanced editors on this list, such as Adobe Premiere or DaVinci Resolve, as it has a more intuitive interface, plus there are a lot of tutorials on Youtube to learn from.

So, what can you accomplish with Vegas Pro? Well, pretty much everything! From basic edits to movies (Paranormal Activity was made using it) Vegas Pro has all the tools you’ll need to make professional edits.

Now, Vegas Pro is one of the most expensive alternatives to Windows Movie Maker, as its pricing starts at $399 for Vegas Pro Edit, and ends at $799 for Vegas Pro Suite, but the good news is you can actually try Vegas Pro for 30 days, which is what I’d recommend you do, and if you do like it, then go for it.

Why Was Windows Movie Maker Discontinued?

Well, this is a question nobody knows the answer to, except Microsoft. But they didn’t release any statement about the removal of Movie Maker, they decided to just remove it, which left many people wondering why. But you still got the chance to know everything about Windows Movie Maker.

As we mentioned in the introduction, the reality is that during its last years, Movie Maker was a shadow of its former self, so rather than continue updating it (and having a team dedicated to it), Microsoft decided it’d be better just to remove it altogether.

What Replaced Movie Maker in Windows 10?

Well, the closest replacement we have is the Microsoft Photos video editor, which lacks some of the options Movie Maker had, but it’s still a decent alternative to Windows Movie Maker, especially if you want to perform basic edits. But as you’ve seen throughout this article, depending on whether you want to make advanced or basic edits, and whether you’re a beginner or an advanced video hobbyist, there are many more alternatives to Windows Movie Maker.

Therefore, to give a recap, let’s go over the final recommendations for video editors. If what you’re looking for is a free basic video editor with no watermarks, then you should try FilmForth, but if you don’t mind spending some money Wondershare is a great Movie Maker alternative too.

Otherwise, if you’re looking for an advanced video editor, you can try out DaVinci Resolve (which is free), or Adobe Premiere (which is paid but has a 7-day free trial). I hope you liked this article, and if you decide to try one of the video editors listed, let us know what you think about it!