How to Add Effects to Videos

This article introduces you to a detailed tutorial on how to add effects to the video with ease.

If an image speaks a thousand words, then a video should tell a million words.

Videos are a powerful medium of today. With its persuasive and peculiar characteristics, it is capable of capturing the attention of the masses. Short videos, YouTube videos, and forwards on the messaging apps, you name it. With the changing global situations and scenarios amid the pandemic, consumption has witnessed an upward trend. This has sent the video content creators into an overdrive.

Creating content by the numbers for keeping the demography engaged while also targeting first-time viewers. There has been an added pressure on the creators in the digital media ecosystem—the pressure of creating consistent videos with up-ticking creativity, engagement, and quality.

Great Video Effects that are Popular

Effects and filters are great ways for a video to set a different tone. Talking about the broadest spectrum, color in film exudes an emotion. Lilly Mtz-Seara created an illustrious video on the Color of Psychology.

Furthermore, you can set a narrative as well for some videos, adding a flair for the flow. As a matter of fact, movies are generally color-coded by genres.

And it was all yellow, in your favorite movie. The go-to subtle effect for Hollywood for portraying hotter climates and North American regions.

The over statute warm tones are generally used to depict warmer regions such as the Middle East, South Asia, Mexico, and similar tropical regions.

Gray and washed out effect

Gray and washed out effects can be seen in apocalyptic movies. Nothing goes better than a blending, uniform gray effect for depicting a state of destruction, rampage, and helplessness.

You have seen in movies such as Terminator: Salvation, Death Race, and The Book of Eli, to name a few.

The classic never goes out of style. Period films have relied heavily on the classic effect to depict the olden times. To ask an average movie watcher, black and white are just easier to imagine for older movies. All the photos and movies before the 1970s generally lacked color, sporting the black and white effect.

Modern movies such as Schindler’s List went all-in with the effect of portraying World War times, narrating the story of the holocaust.

When the reality is off-kilter, green monochrome comes into play. The color depicting ominous, danger, and mystery sets a narrative that something is not just right, and there is more than what meets the eye.

Matrix trilogy, Fight Club are some of the most famous examples where green brought it home with the tone setting.

There has to be an unwritten rule when it comes to horror, eerie movies. Blue signifies cold, calmness, and isolation, amongst other relative emotions.

The calming effect of blue in the movie color palette is amongst the most popular effect. We have seen the magic of blue in popular movies such as The Ring, Saw, and A Night on Elm Street, to name a few.

The age of digital correction is here to stay. Back in the film reel days, adding filters, effects and exposures was a tedious task. Not only that, these were expensive and time-consuming at large.

Post-production processing has become increasingly easier as movies are shot the majority on digital.

How to add effects to videos with FilmForth

As bid adieu to the Windows movie maker in 2017 with the Windows 10, doing anything video has become a hectic task. On top of that, people find it challenging to do things with the newly introduced Microsoft Photos. Adding effects is a whole other ballgame, to begin with.

There is a free app for Windows that does it flawlessly, without requiring extensive technical know-how of computers. FilmForth is easy as it can get for editing videos. Every option is on the screen, with no hidden settings to get lost in. You add a video, select the filter of your choice, and publish the video straight away.

For the sake of this tutorial, we took a random video of the Internet of kids dancing in circles.

Step 1. Open FilmForth from the startup search or the Microsoft Store store itself.

Step 2. Click on the blue button that says New Project.

A project constitutes a video that is being edited. Multiple videos can be added for using its content in one video. You can create different projects for different video assignments.

Step 3. The Create, a New Project window will pop up on the screen. Give your project a name and select the path where you wish to save the video after publishing. 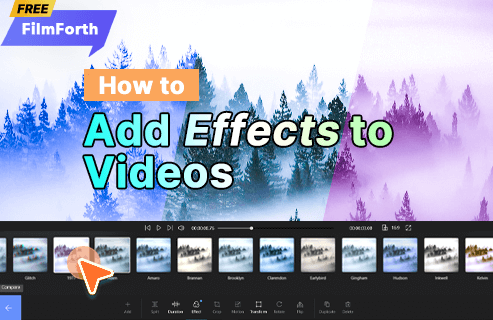 Consequently, click on the Create button. You have now successfully created a project.

Step 4. In the project dashboard, there are two ways to upload a video. You can either drag n drop or manually locate the video. 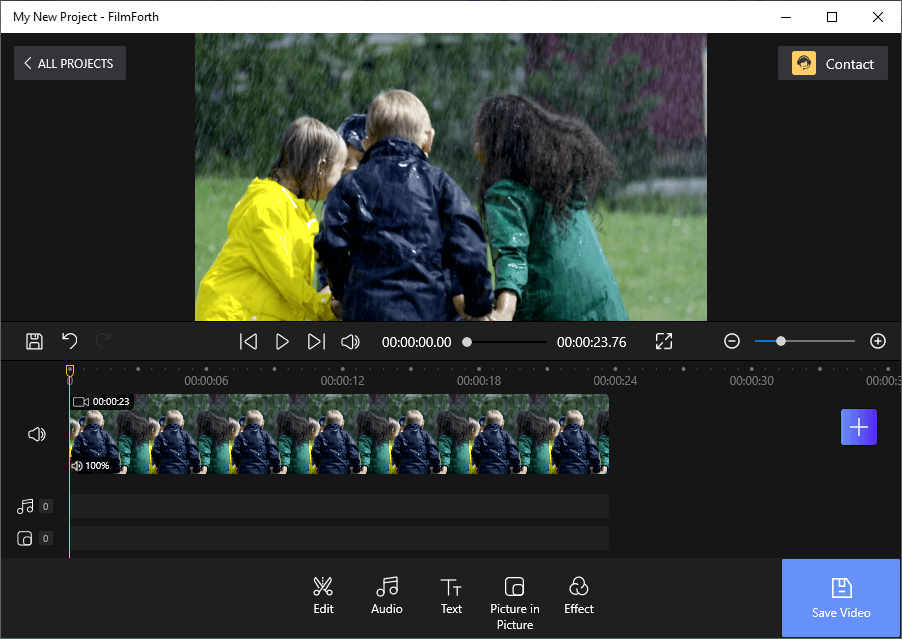 Start to Edit the Video

If you want to delete the video, click on the video feed with thumbnails and press the Delete button on your screen. Similarly, you can add another video to the project by clicking on the blue-colored plus button given in the video feed itself.

Step 5. After you are done adding a video, click on the Effects button. It is situated on the bottom bar of options.

Step 6. There will be over two dozen effects to apply to the video. Click on any of them, and it will be used in the video. 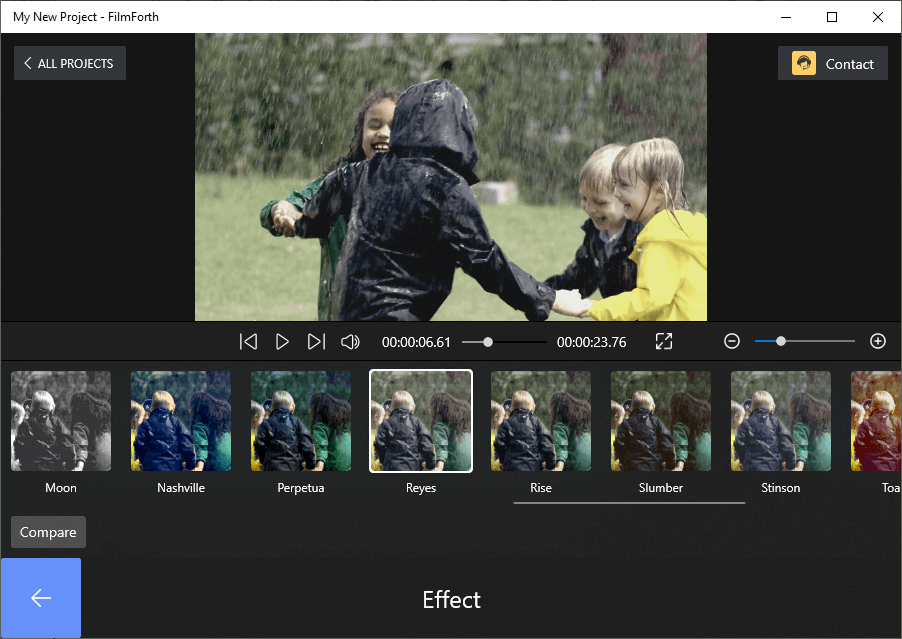 For comparing with the original, click on compare. The button will help you ascertain the differences in the color tones of the video.

Step 7. Once you have selected the effect of your choice, click on the save video button. A prompt will appear, asking about the quality in which you wish to publish the video. The quality ranges from 480p to 4K.

You have successfully added a beautiful effect to the video. Wasn’t it more straightforward than your expectations?

Adding any kind of effect on the video is easy. Make sure to keep the original copy of the video as a backup. Saving a video will take time, depend on the size and length of the video.