Everything about Windows Movie Maker

This post tells you everything about Windows Movie Maker.

Windows Movie Maker was a video editing program created by Microsoft. The program allowed users to integrate video, sound, still images, and transcripts to create a personalized movie. Over the years, Movie Maker was updated several times, with the last update being in 2012. In 2017, Microsoft announced that it was no longer supporting Movie Maker.

Today, anyone attempting to find Movie Maker is told, “Windows Movie Maker, part of Windows Essentials 2012, is no longer available for download.” Users are warned, “Websites that offer free downloads of Movie Maker are not offering the real thing, and those downloads may contain malware, viruses, or hidden costs.”

What could have happened to the program that one of its many users once called “The best multimedia editing program designed by Windows”? (from g2) We took some time to find out by following the program’s history, its interesting updates, and some of its challenges. We end by looking at where the demise of Movie Maker leaves those who relied on it.

The History of Windows Movie Maker

Windows Movie Maker (WMM) was first included with Windows ME, commonly known as Windows 2000, the successor of Windows 98. It was introduced to the market on September 14, 2000.

An archived Microsoft page says that Movie Maker “was a part of Windows Essentials software suite and offered the ability to create and edit videos as well as to publish them on OneDrive, Facebook, Vimeo, YouTube, and Flickr.” Adding, “It is comparable to Apple’s iMovie.”

The same archived page reports that Movie Maker played an influential role in the history of YouTube in the early 2000s. The page says the program “was the first tool to be used in the creation of YouTube poops, a sub-genre of popular YouTube videos.”

Microsoft woke up to the need for a free video editor for their OS when Apple started shipping iMovie with macOS. The idea behind it was simple, to have a video editing utility in the essential media package. Consumers wouldn’t have to look elsewhere to meet their standard video editing needs. 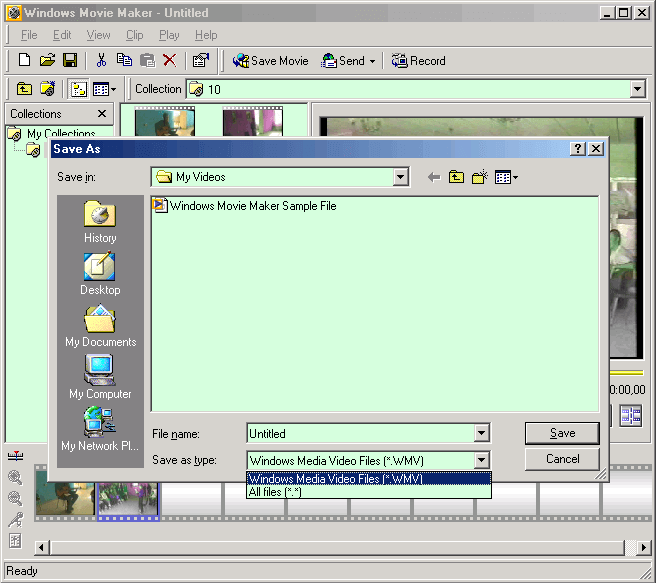 Windows Movie Maker 1.1 and Beyond

Even though Microsoft may have hatched the idea of its Movie Maker as a response to more sophisticated offerings in the market such as Apple’s iMovie, the former’s inaugural product did not seem to have the features to match the latter’s. Thus, industry players didn’t seem to take it seriously.

To get users and the general industry to take Movie Maker seriously, the software engineers at Microsoft went back to the drawing board. Their efforts produced Version 1.1 in 2001.

The veteran editor’s Version 1.1 release coincided with the release of Windows XP, which was a leap forward in their OS lineup. Windows XP emphasized a new user interface, modern tools, and accessibility. It was only fitting to release the movie maker with significant upgrades with the tech giant’s new operating system.

Consequently, with minor updates, the newer Version 2.0 was shipped along with Windows XP Service Pack 2 as a part of the media bundle in 2003. 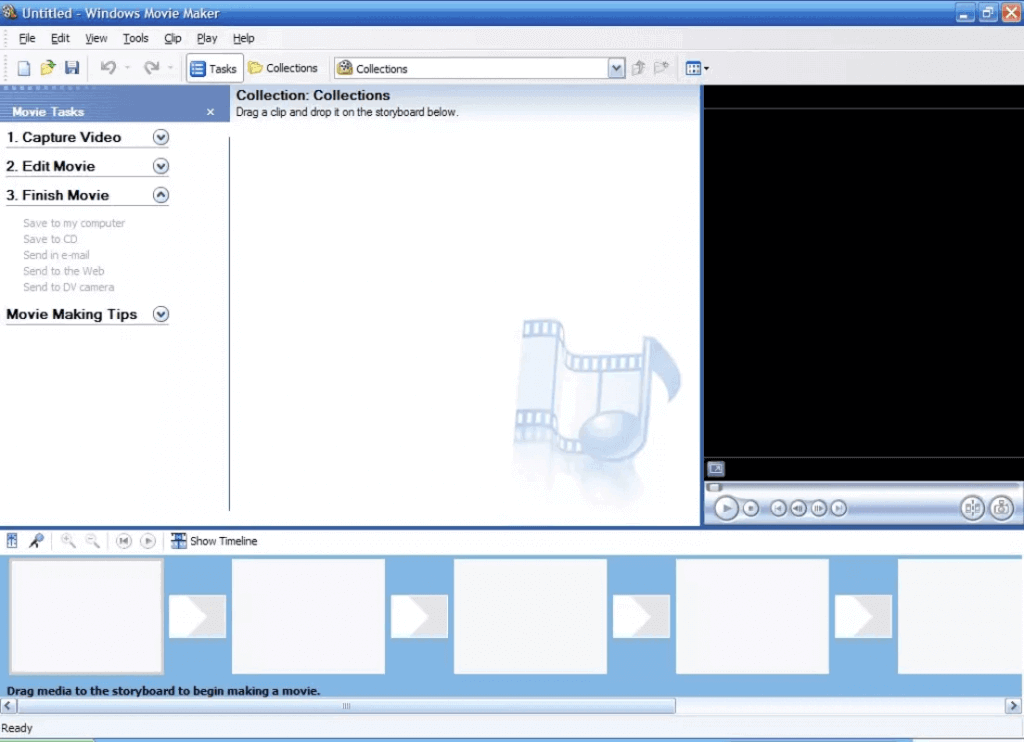 Windows Movie Maker 2.0 and Beyond

In 2006, Microsoft announced Windows Movie Maker 6.0, which was released along with Vista. The focus was on new features, which included:

The new version encountered problems as it could not run on older systems. This prompted MS to release Version 2.6, which ran exclusively on Vista, featuring older transitions and effects. 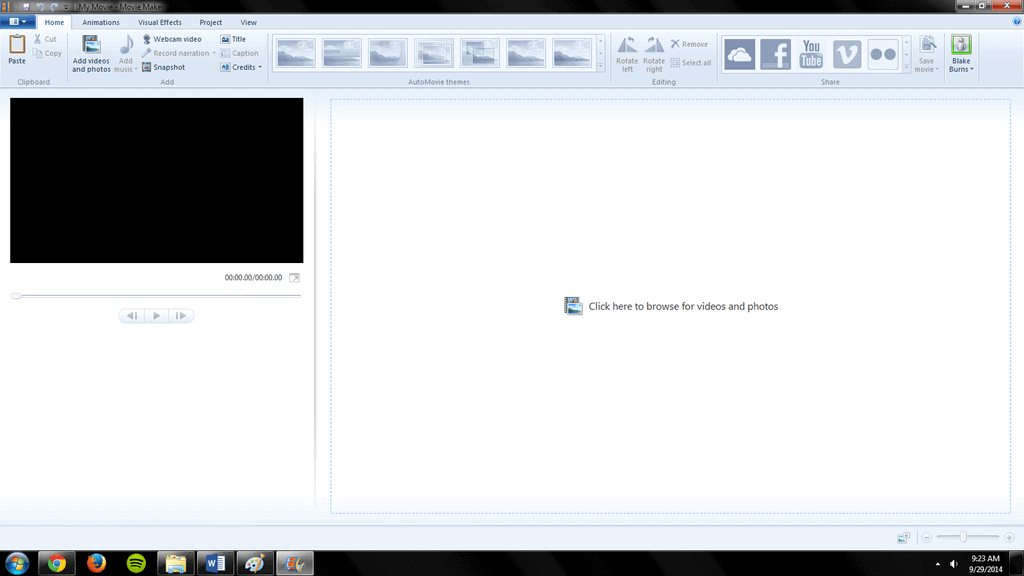 Like Vista, version 6 had a short stint, which ended with the underwhelming operating system.

As a part of the Windows Essentials package, the new version named Windows Live Movie Maker was released.

A standalone application, laced with a modern user interface, including the ribbon toolbar, similar to what was offered on Office 2007. Video projects of older versions were not compatible with this one.

Amongst the most notable features of the new addition was the auto movie. It created slideshows and videos automatically from your video clips, images. The created movie included effects, music, and much more.

The wagon did not stop there; you could also directly export movies to DVDs, YouTube. 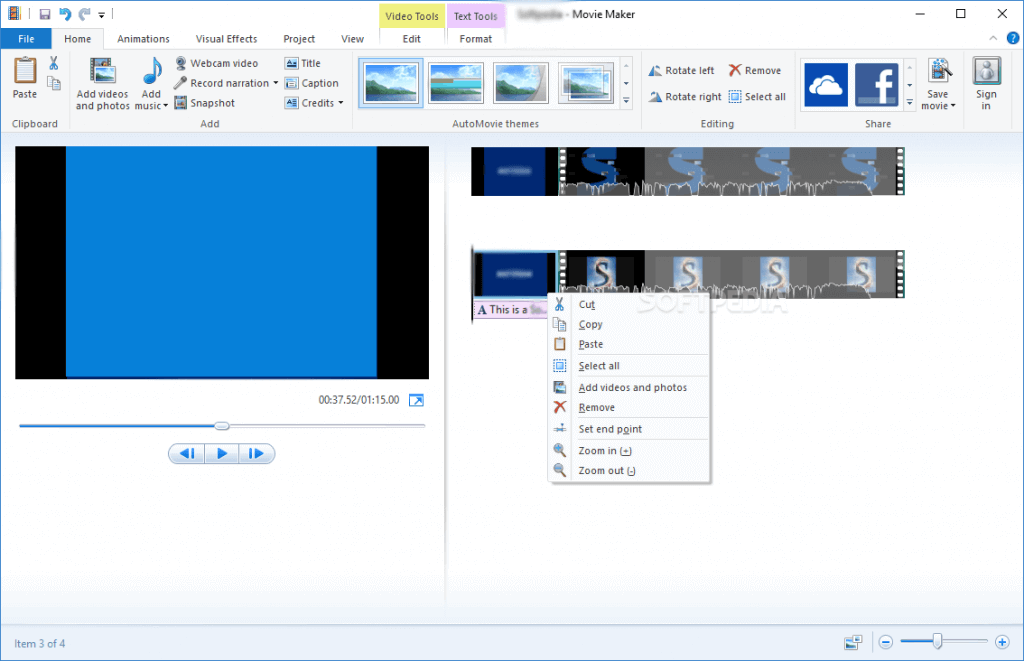 In its lifetime, Movie Maker faced its fair share of challenges. Todd Bishop writes for Seattlepi.com, an online newspaper based in Seattle, Washington. He tells the story of the frustrations at Microsoft regarding the performance of the team running Movie Maker. He does this by publishing a 2008 internal email sent to the company executives by Bill Gates, then a chief executive officer at Microsoft.

In the email entitled “Windows Usability Systematic degradation flame” Gates holds nothing back. He begins by telling the recipients, “I am quite disappointed at how Windows Usability has been going backward and the program management groups don’t drive usability issues.”

The rest of Gates’ email reads like a rant from a frustrated user, leading Bishop to say, “Sometimes, software isn’t so magical. Even for Bill Gates.”

As part of his long email, Gates tells how he was taken from pillar to post trying to download Movie Maker. He laments, “So after more than an hour of craziness and making my programs list garbage and being scared and seeing that Microsoft.com is a terrible website I haven’t run Moviemaker and I haven’t got the plus package.”

It looks like Gates is not the only one that was frustrated. A review of Movie Maker by TechRadar.com says, “Both the mother OS and the application [Movie Maker] itself were not well received, the former blighted by technical glitches and the latter by a woeful lack of features.” This statement refers to the initial version of Movie Maker.

With the discontinuation of Windows Live, the conventional editor made a comeback as Windows Movie Maker 2012. It came bearing gifts in support of H.264/MP4, which became the default export format.

That’s not all; it added support for direct upload to Vimeo (and other sites in Windows 8.1 release), along with hardware video stabilization.

The 2012 version of Movie Maker came as part of a package that also included,

As the world was welcoming 2017, Microsoft decided to pull the plug on its long-running video editor. It is no longer available for download from any official source.

Industry experts have attributed the move to Windows moving into the next generation of user interface and accessibility. WMV (Windows Media Video) provided the utility, but it felt out of place in the new scheme of things.

A writer who goes by the name Rahul on MSPoweruser.com, a blog that says it “covers technology, gaming and more from a Microsoft-informed perspective,” suggests a reason why Movie Maker was discontinued. He writes, the Movie Maker “did not achieve the success Microsoft would’ve liked, as a result of which the company had to discontinue the support for the program.”

A Movie Maker user says that Rahul’s opinion is flawed. The user who goes by the name Andy Roy argues that the program “was quite popular, just like Windows Live Messenger.” Adding “To this day, you can still [see] thousands of videos on YouTube that were made in WMM.” Roy suggests that “They [Microsoft] simply stopped development of it along with the rest of the Windows Live suite.”

Microsoft introduced Story Mix App, which was a rather concise replacement for the actual movie maker. They filled the gap after a period of two years with a cloud-based editor that kept on giving.

The focus of the new editing tool has been the new age of content creators who want to quickly create videos with soundtracks and neat effects without requiring gruesome efforts.

After a short stint, the Story Mix app was replaced by the Microsoft Photos app, which included a video editor. Users can rely on the Photos app for their standard video editing needs while experiencing the streamlined user interface.

Can I still get Windows Movie Maker? This is a common question among many people who relied on the program. The short answer is no; you cannot get the movie maker from an official source.

Installation files of Windows Movie Maker are available on various download sites and portals. The bad news is that they cannot be trusted and may contain viruses and malware, among other things, with nefarious intentions.

If you’re planning to download it again from the internet, you better take a step back and reconsider your intentions.

There is a way for you to use it, but it involves installing older versions of Windows, such as XP or 7. The legacy software support for these versions of Windows has ended. Therefore, we would advise you to tread with caution while going down this road.

To an average person, the Photos app looks like just another photo viewer. However, it packs an experience and more utilities in its bag. The powerful video editor can create slideshows and videos, automatically or from scratch, with effects, text, and more. 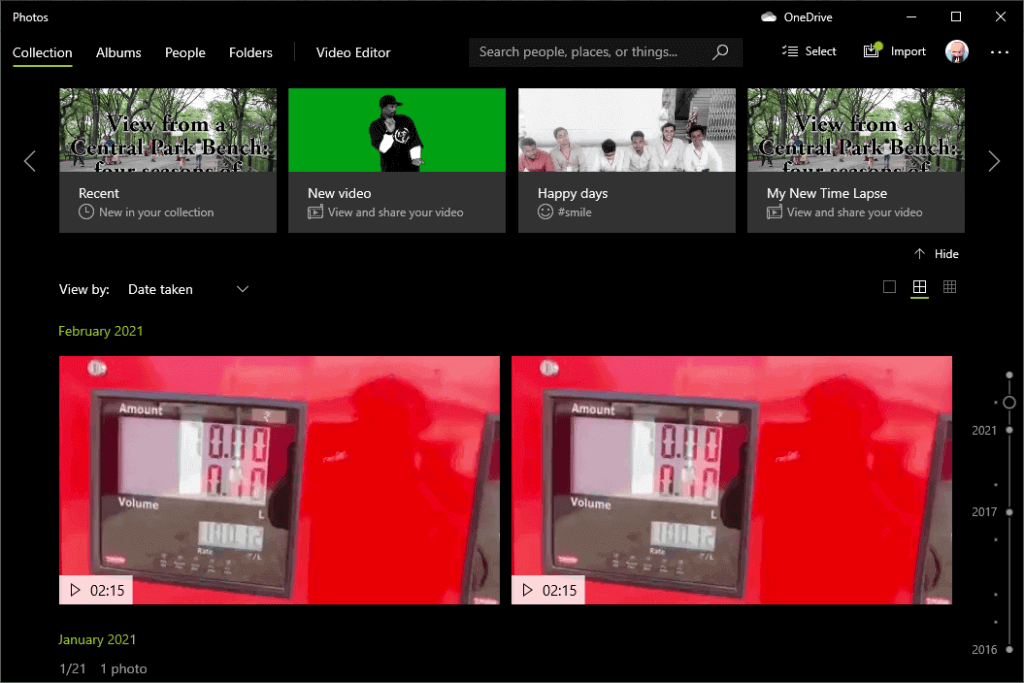 You can access the video editor app by clicking on the Video Editor button. Or, you can right-click on any video and start editing the video with the photo app.

Similar to Windows Movie Maker, the Photos app comes as a free utility with Windows 10. You can always download it from the MS Store if you can’t find it on your PC for some reason.

The Photos app was first released in 2012 as a generic photo viewer before being upgraded with a capable video editor. The Story Mix app was merged into Microsoft Photos.

People were apprehensive at first, but constant updates to its features made the Photos app difficult to ignore.

Modern and Easy UI: The user interface on the Photos app is miles ahead of what was offered on Windows Movie Maker. Integration with the video editor is sublime, and you wouldn’t notice a knot.

Editing Shortcut: Open it directly in the Photos app from the right-click menu. Start editing right away by selecting an option from the Get Creative with This Video button. 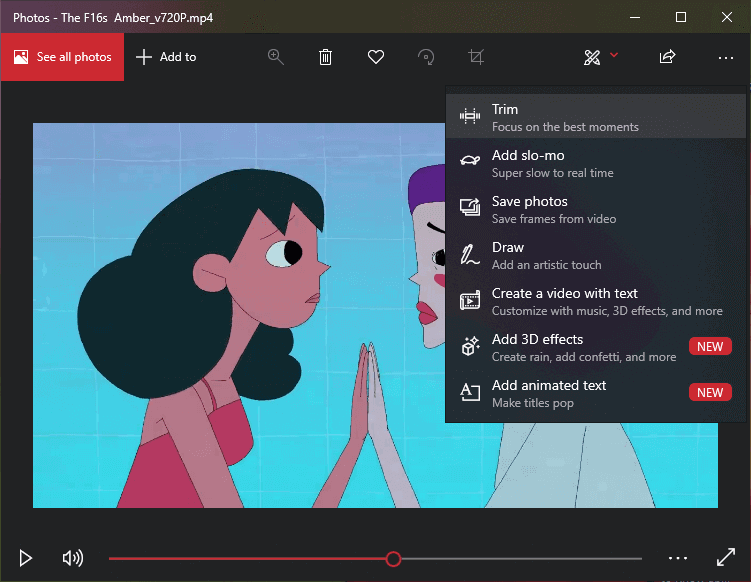 3D Effects and Animations: Add different 3D effects and animations alike when saving on the visual effects designer. Search for the right elements in the library and apply them right away.

Sync Videos and Projects to the Cloud: Auto backup all your video projects and data to a OneDrive cloud account. The automatic backup feature has been phased out for a while, but you can do the backup manually.

No Transitions: There are no transitions for you to use in the Photos app. Transitions are used to tie two scenes or clips together. They are often used to open or end a video; transitions provide a segue for the content.

No Output format choice: You cannot export videos in a media format of your choice. Microsoft Photos only supports output in MP4 format.

Windows Movie Maker is the past, and the Photos app is the present, perhaps the new future. We wait for what Microsoft has in store with their next OS installment.

In the meantime, you can use the Photos app for basic editing while trying other feature-rich Windows Movie Maker alternatives that hit it out of the park.