Adobe After Effects allows you to create eye-catching dynamic graphics and stunning visual effects very efficiently and accurately. Let your video show a refreshing effect through some professional methods.

Although Adobe After Effects is a paid software, a large number of people are still willing to download it. The main reason is that it is undoubtedly one of the best programs for creating special effects and animation graphics. This software can not only be used for entertainment in your spare time but also can meet your needs even if you are a professional. 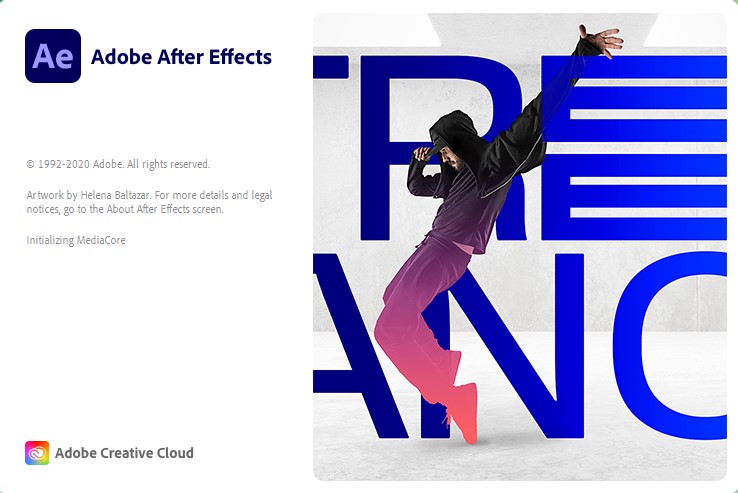 Opening screen of Adobe After Effects

As a kind of very professional software, it covers the features of multi-layer editing, graphics drawing, motion graphics, composition, color matching, special effects, and multi-size and multi-format rendering. So Adobe After Effects has a great user base, which is deeply loved by professionals and amateurs.

Different from other free software downloading methods, Adobe After Effects, as a paid program, needs to enter the official website and then follow the system instructions to complete the payment before downloading.

There are three kinds of charging standards:

Open Adobe After Effects, and you will find that there are four large panels. The main interface is pretty simple and clear. You can stretch these panels at will with the mouse to change their sizes for your convenience. Here, you will notice some useful functions in the upper left corner of the main interface. 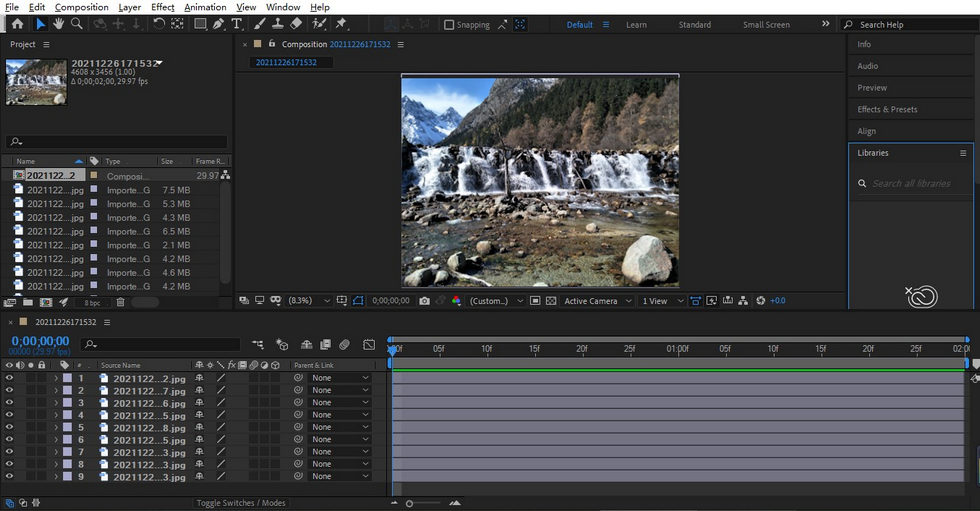 The Main Interface of Adobe After Effects

The first is the File menu bar. In File, you can open and create new projects. The most important thing is to always save your process (Ctrl+S). When saving, it is important to keep saving the project as a different version, which is convenient for you to call up the previous version at any time. Otherwise, the subsequent operation will directly overwrite the previous version. Moreover, there is a very useful function here-Dependencies. If you want to share files with others, you can click this function, and Adobe After Effects will automatically collect files for you, and then you can share these files with others or use them as a backup.

When the memory is full, it will affect the running speed of your computer. At this time, we can find the Purge button in the Edit column, which can clear the memory and cache to make it run faster. You can learn some shortcut keys that can be used in the operation by clicking the last button -Keyboard Shortcuts, which can save you a lot of time. 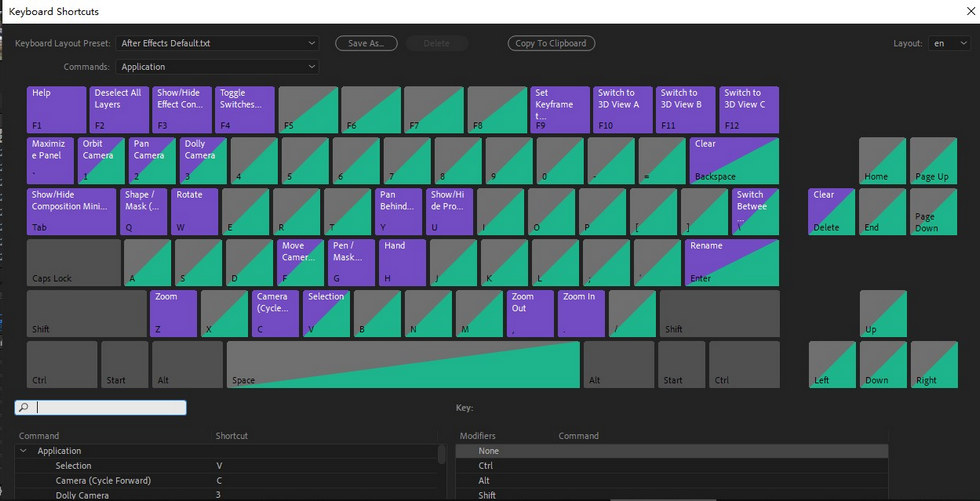 Next is the Effects menu bar, where you can see all the effects contained in Adobe After Effects. And as a powerful piece of Chroma Key editing software, After Effects helps you change video background with ease. Of course, if you add some built-in plug-ins, these plug-ins will be displayed in this column one by one.

In the Window menu bar, you can call or close some panels. Reset “Default” to Saved Layout is often used here. Because you may often change the size of each panel during operation, this operation can immediately restore a chaotic interface to its default state, making your operation interface orderly in an instant.

Generally speaking, each software has a specific workflow, while the general workflow of Adobe After Effects can be divided into the following six categories: importing, multilayer editing, adding effects, making animation, synthetic toning, and rendering.

You only need to double-click the mouse on the left blank panel to complete the import of materials. Here you can classify all your materials by creating new folders (The buttons below will also help you a lot). Double-click the material, and the preview area in the middle will show the material. At the same time, you can see some specific information and parameters of the material while doing it at the top.

After you have imported all the materials you need, you can start your follow-up operation. Before multi-layer editing, you need to know what layer types Adobe After Effects has:

In multi-layer editing, first click the third button below the material box to create a new composite and name it, so that you can find it soon later. In the operation interface below the main interface of Adobe After Effects, you can perform some detailed operations on your material. You can directly adjust the layer time by dragging the layer time bar with the mouse. The most commonly used layer may be the Text Layer. Basic video editing like cutting videos into clips in After Effects can be done with a few clicks.

After adding a Text Layer, you can set it in the action bar on the right. This feature allows you to add dynamic text and scrolling subtitles to your video. At the same time, Adobe After Effects also provides text effect presets, which can easily select and apply dazzling text actions in titles. When you are working on a complex project, there may be various kinds of layers involved. Then you will notice that you can hide a certain layer in the current preview interface by clicking on the left-most small eye symbol of the layer. 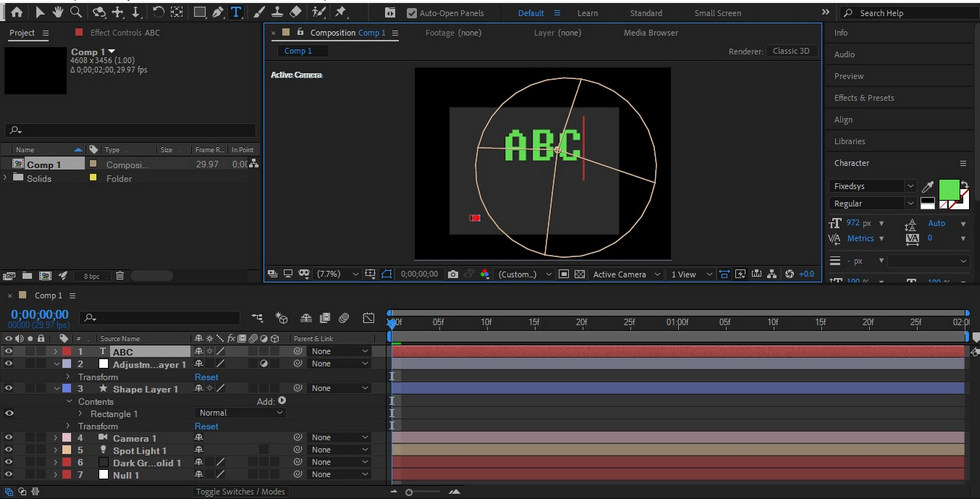 If several clips in a video need to apply the same effect, then you can directly use Ctrl+C and Ctrl+V for quick editing, instead of setting them one by one. Here are some useful effect menus. 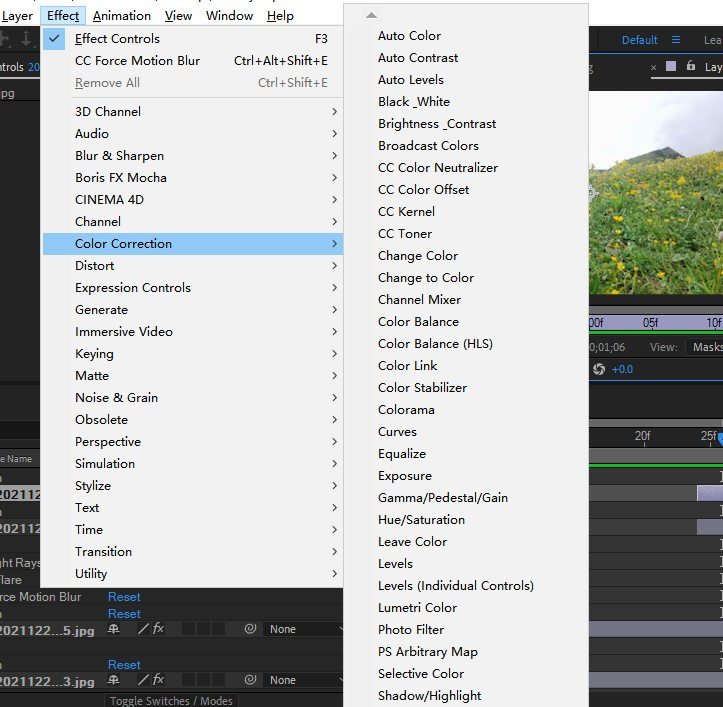 Search for Desired Effects in the Search Box

This operation mainly uses keyframe animation or other animation methods to make elements produce dynamic effects. Fuzzy special effects are quite useful in making dynamic effects. Because whether it is moving fast or slow, it is impossible to be as clear as a still image.

The latest version, After Effects 2021 can be accurate to six-thousandths of a pixel, which can accurately locate animation. At the same time, it should be noted that all animations can’t always move at a uniform speed, so you need to set the acceleration or slow motion of your animation.

Learn more: How to Add Animation Overlays to Videos for Free

Synthetic toning means that different elements are fused to calibrate different lenses. A video consists of many different material resources. This makes the workflow of synthetic color matching very important. This operation can keep the video in harmony. The basic operation of composition is mainly divided into four steps: New Settings, Pre synthesis, Copy and Replace, and Hierarchy Switching. You can also change the composition settings at any time by using the shortcut Ctrl+K when you are performing the composition operation. However, considering the final output, it is recommended not to change the settings frequently. 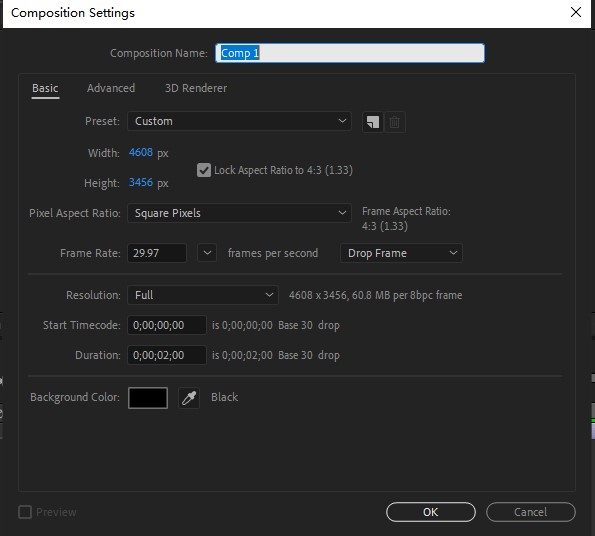 After all the operations are finished, you need to generate a video with the right size and format. After checking that all steps are correct, press Ctrl+M directly to enter the operation interface, and click Lossless to enter the specific adjustment interface. After adjustment, select a target storage folder and click Render to complete the whole operation process. 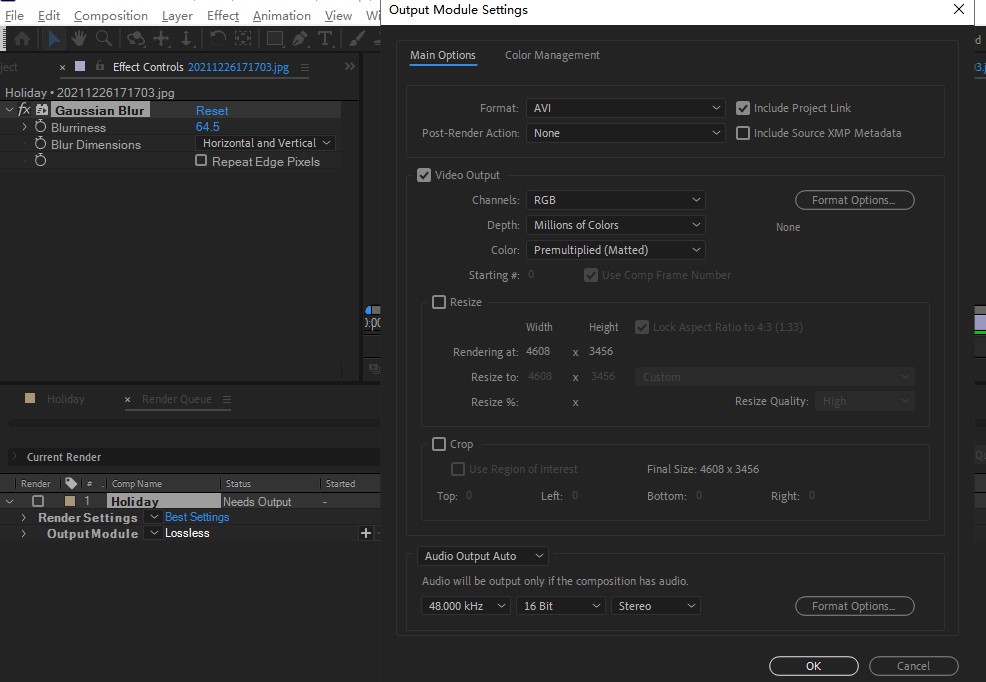 The Final Step of Editing Videos

Adobe After Effects has a wide audience, which is not only favored by professionals but also sought after by amateurs. It is a piece of very popular software. It has the functions of developing and creating animated videos with animated graphics, characters, and texts. These features make your video attractive. At the same time, it can also be used with other software of Adobe series to improve creative efficiencies, such as PR, PS, and Au.

Because of the professionalism of Adobe After Effects, beginners need to spend a long learning cycle to get familiar with it and operate it flexibly. But it’s very worthwhile. Once you master this software, it will make you gain a lot and get surprises.