KineMaster can’t export? No worries, on this page, you’ll find 7 reliable solutions to resolving the ‘Something Went Wrong While Saving KineMaster’ issue.

However, some users may encounter KineMaster can’t export issues. For example, an error message pops up from the video export screen saying there’s ‘Something Went Wrong While Saving KineMaster’, which is certainly a bummer when you’ve just finished your talented creating and you’re ready to share it with your friends, you family, and your YouTube followers.

In this post, you’ll learn what exactly is this KineMaster export issue, why it happens, and the 7 working solutions that’ll effectively resolve the issue. Now please read on to learn more.

Why KineMaster Fail to Export a Video?

In the KineMaster video export screen, the error message saying ‘Something Went Wrong While Saving KineMaster’, ‘an error occurred while exporting’, or ‘Codec Init Failed Error’, indicates that there’s something wrong when KineMaster is trying to save and export your video editing project.

Update KineMaster to the Latest Version

Always update KineMaster to the latest version from App Store or Google Play. This will make sure there are no history version issues or problems from using different versions of project files and the KineMaster app.

In some cases, there are application conflicts or remaining codecs from other apps which caused the KineMaster exporting issues. In that case, you can try crisp rebooting the KineMaster app.

Do a KineMaster resetting before rebooting also, go to KineMaster > Settings > Reset.

Make sure KineMaster is cleared in the background before restarting the KineMaster app, it may solve the issue.

Using other applications while exporting the KineMaster video might bring about conflicts and complications between separated apps and the failure of the latter, with the error message saying ‘Codec Init Failed Error’.

Avoid using a screen recorder or video-related applications like YouTube when you export video. Clear these applications in the background and try exporting the video again.

The universal solution to most app issues is to clear the app cache, and that is worth a try. It’s also a quite effective solution to KineMaster crashing issue while exporting.

To clear the KineMaster App cache, go to your mobile phone’s Settings > Apps > Kinemaster. From the app information screen, click the Storage option and then hit the Clear Data button to clear KineMaster App Cache. Then to confirm the clearing, click OK.

And if you have a lot of existing video editing projects that you would never intend to use, deleting them will be a good choice.

If your KineMaster failed to export and says ‘not enough space to export’, then the problem is overwhelmed device storage. The video projects take larger storage space after being exported, so to export videos successfully, make sure to leave enough free space on your device’s internal storage.

On older mobile devices, the KineMaster exporting process for high-quality videos could stutter or fail. Try selecting a lower resolution value and a lower bitrate value (the higher the bitrate, the smoother the video playback, yet the bigger the file size), and export the video again.

For video editing beginners, certain advanced or experimental settings are quite excessive and it’s better to disable some for smooth KineMaster running performance.

Go to KineMaster Advanced and Experimental settings menu, and disable the options that you don’t need. Generally, most video editors wouldn’t need these options enabled. 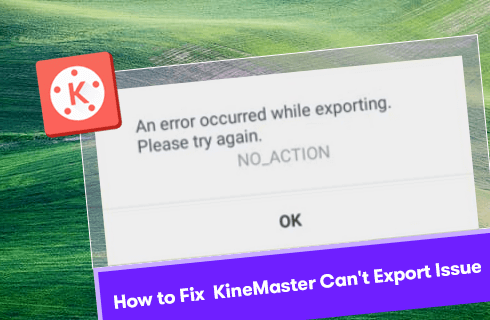 What to do when KineMaster won’t export?

How to fix KineMaster something went wrong on iPhone?

To fix KineMaster something went wrong exporting issue on iPhone, first go to iPhone settings > App > KineMaster, and clear KineMaster app cache. Then do a fresh reboot for KineMaster app, and the problem should be resolved.

How to fix KineMaster stuck on save and share?

If you find your KineMaster stuck on the save and share screen, you should clear KineMaster app cache and reboot the application. And make sure there’s enough free storage space on your mobile phone.

How to fix KineMaster no action error?

KineMaster export video dec init failed issue is usually the result of application conflict. To avoid the issue, clear all apps running in the background on your mobile phone, and fresh reboot the KineMaster app.

Why does KineMaster keep crashing?

There are two most possible solutions to the KineMaster keep crashing issue. One is updating KineMaster to the latest version from Google Play or App Store, and another is clearing the KineMaster cache from your mobile phone settings.

That’ll be all about the solutions to fixing the KineMaster failed to export issue. Since we’re here, I believe you’ve benefited from this guide and have gotten your problem resolved. And if you still have issues exporting videos in KineMaster, the frequently asked questions listed above may have the information you need.

After trying one of the solutions, don’t forget to go to KineMaster Settings > Device Capability Information > Tap More > Run Analysis Now to let KineMaster check the device capability status, which gives the maximum video quality KineMaster can handle on your device for you to refer to.

And if you also edit videos on Windows, you’re also recommended to try the best free video editor for Windows: FilmForth.

Additionally, you are more than welcome to leave us your thought in the comment section below, please share with us your brilliant ideas!