How to Free Record Screen on Windows and Mac in 2022

This how-to post reveals the detailed steps about how to record your screen on Windows and Mac.

Sure! In this post, you are going to easily learn how to freely record screens on Windows and Mac computers, to capture your actions (full-screen or partially) on the computer. Two free screen recorders for Windows and Mac that helps to record full screens or windows will be introduced. Let’s dive right in.

How to Record Screen on Windows for Free

Windows 10 does have a built-in recording software called Xbox Game Bar, but it is too limited for Windows desktop and File Explorer recording. The screen recorder described below is completely free and suitable for screen recording in any scenario.

Step 1. Get RecForth for Free

You can download RecForth from Microsoft Store or the official website, then wait for it installed on your computer. Now you can launch it and enter the RecForth interface like this.

Step 2. How to Do Full-screen Recording

Once you enter RecForth, select the Screen button, and the icon below the control panel allows you to do some advanced settings as follows.

To do full-screen recording, open the webcam to capture your movements in a frame for a picture-in-picture effect. You can capture clear system sound from Speaker or use the microphone to add voice comments. Customize the color and size of the pointer to highlight the important content you want to show.

Step 3. How to Record a Rectangle Screen

You can customize the capture area after selecting Rectangle recording mode. Drag the text box or fill the number in it to determine the size of the box. 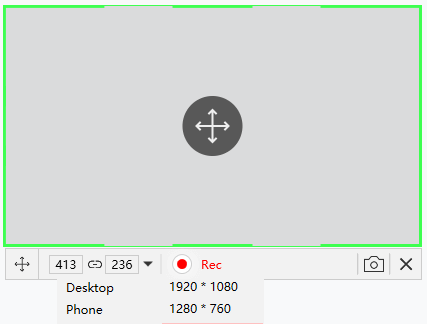 You can also select Phone or Desktop from the dropdown box, which gives you the default box size for the video to play better with your device.
After you finish the above operations, you can click the red REC button to start recording.

During recording, you can click the camera icon to take a screenshot, and the screenshot will be saved in the recorded file. 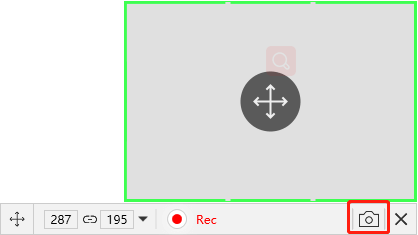 Step 4. How to Record a Single Window

Open RecForth and select Window mode. Move your mouse over the Window you want to record and click. An action box will appear in the lower right corner, then click the red start button to start recording. 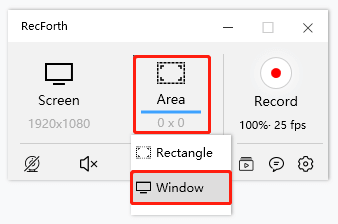 Click the red Record button or press F1 to stop recording, then a pop-up allows you to check the screen captured video. You can playback, delete and rename the captured Video now on this interface. If you want to get a breathtaking video, you can edit and convert the video with the other two software. 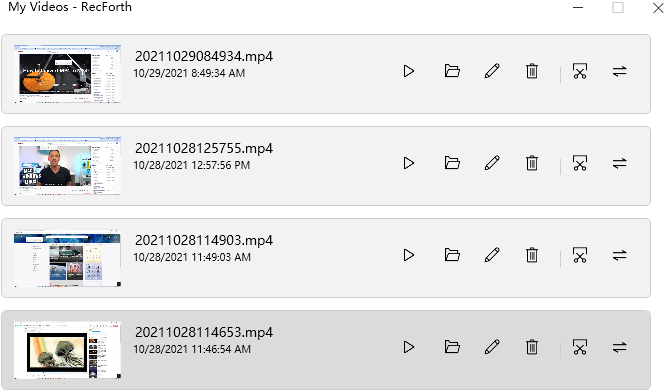 Click on the Setting icon to enter the RecForth Settings home screen. You can also perform more advanced settings, parameter settings, and free settings such as countdown time and stop recording time.

How to Record Screen on Mac for Free

Open the QuickTime Player from the Applications File and find New Screen Recording to open Screenshot and display the tools. You will then see the screen record window shown below.

How to Open QuickTime Player

Step 2: Do the Customize Setting

Before recording, you can set the small arrow and turn on the microphone to record system sound or voiceover by clicking Options. Once set, tap anywhere on the screen to start recording the entire screen, or drag and drop to select a recording area and click the Record button to start.

Click the stop button on the menu bar to stop recording, or press Command-Control-Esc. When you stop recording, QuickTime Player automatically opens the recorded content. You can play, edit or share recorded files now.

If you’re still a little confused about screen recording software, see if the following further reading can help you.

How do I record my screen with Windows 10 Game Bar?

Press Win+G to activate the Xbox Game Bar, then choose “This a game” on the interface which jumps up. Once you enter the interface, Choose the Capture icon and click the Start button to begin. But remember that gaming features aren’t available for Windows desktop and Explorer Files. Move your mouse to Show All Captures and click it, then you can review the captured videos.

How do I screen record with audio?

How to record my screen with a webcam overlay?

RecForth introduced to you above can cover the camera during recording. After entering the software interface, select the mode that can open the webcam for recording. The built-in webcam will help you to capture a clear picture to achieve the picture-in-picture effect.

We’ve all had a rough idea of how to record screens for free on Windows and Mac. The two methods I recommend above are both free and simple, and the two apps above are perfectly capable of meeting your basic recording needs. RecForth makes recording screens easier with one click, now let’s give it a try.